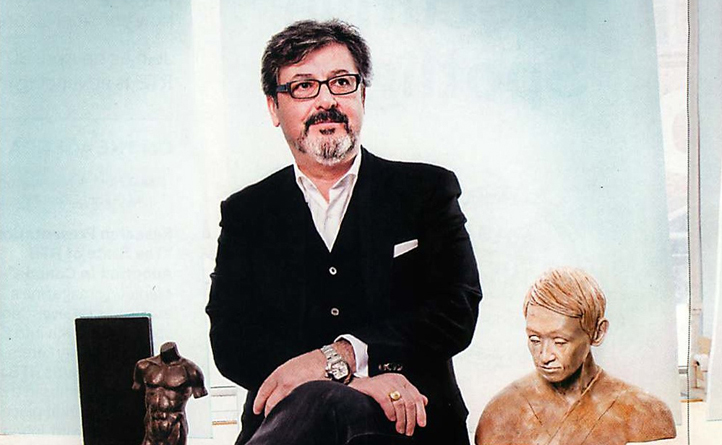 ALDO CUNDARI DIDN’T SCULPT FOR 30 YEARS – a remarkably long time for someone who planned on making it his career. Cundari attended Rome’s Istituto Europeo di Design in the late 1970s. He trained in the classical forms of the discipline, but part of his education included the more practical elements of art-industrial and interior design. As a final thesis project, Cundari was given a 1,000-sq. ft. apartment to fill with anything he could design and build from scratch.

“Whatever I ended up doing to support myself, my goal was always sculpture,” he says. But upon his return to Canada in 1980, jobs in related fields were scarce. With some experience in graphics, there was an opportunity in the marketing world. Cundari launched the agency that still bears his name that same year in his parents’ home, and over time, as you can imagine, the “business” part of his creative agency quickly overshadowed his purely artistic pursuits- the shop grew, took on full-time staff, Cundari created and sold a software business … sculpting kind a fell off the schedule.

“I’d found other things to do with my hands, building things around the house,” Cundari says. “But you end up feeling like there’s always something missing.”

That “something missing” wasn’t found until he turned 50. Cundari’s staff (now nearly 100 strong) bought him a birthday present: a 12-week course at the Toronto School of Art. That was four years ago, and Cundari has visited the school nearly every week since, using its studio space and rediscovering his old passion.

“I’d totally forgotten that was my passion. The day I walked in I knew what I was missing – inventing new things. I used to sit there for an hour, waiting for the school to open; I find it that exciting. All the stress that this industry brings me goes away while I’m there.” It was this joy that led him to “accidentally”

buy the art school with two other students over the December holidays. TSA’s board of directors had declared bankruptcy, but Cundari and his co-conspirators (Brian Bradstreet from Hamblin Watsa Investment Counsel, and Sol Roter, president of Liquid Capital Corp.) saw an opportunity to “rescue” the school and turn it into a not-for-profit. The trio is now in the process of securing a new facility, forming a steering committee and prepping for a relaunch. Cundari sees a lot of potential in the 40-year-old institution, particularly as a training ground for agency creatives looking to brush up on certain skills. He was reluctant to say too much at press time before all the paperwork had been signed, but he seems to have stumbled into his sculpting career despite a 30-year absence.