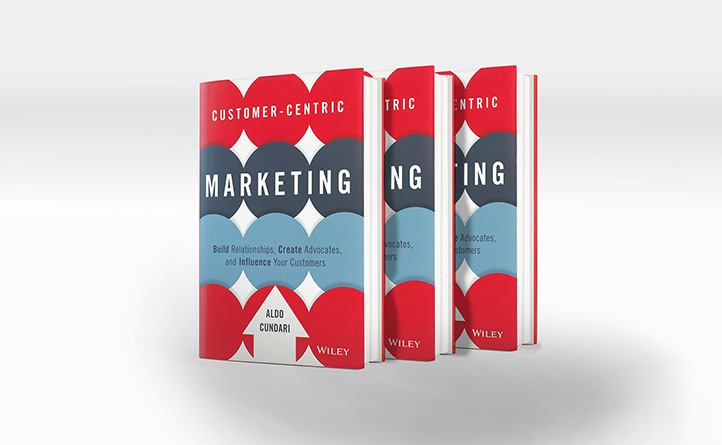 With 35 years’ experience running one of Canada’s most successful and respected independent advertising agencies, Aldo Cundari has seen a lot, learned even more and accumulated an impressive reservoir of industry understanding and wisdom. He’s applied that insight and knowledge to a new book from Wiley, Customer-Centric Marketing: Build Relationships, Create Advocates, and Influence Your Customers.

The book offers actionable advice for marketers trying to make sense of the consumer-brand dynamics radically reinvented in the digital age. Marketing will share a series of excerpts from Customer-Centric Marketing over the next few weeks.

Customers move through the awareness, engagement, attachment, and Advocate stages when they have bought, tried, and had positive experiences with your offering. To convert them into Advocates, you need to start a different kind of conversation. Mark Twain provided a good insight into what it’s going to take: “You can make more friends in two months by being interested in other people than in two years by making people interested in you.”

To start, you have to empathize with your prospective customers, understand their needs, and know how your product or service will make their lives better. From there, you need flawless product and service experiences, helpful and entertaining content, and access to insider knowledge. This combination encourages customers to turn into Advocates, and Advocates to persuade others in their social networks to join them: for example, “Here’s a great video” or “Here’s a special event you should check out.” Not only are you providing value to Advocates, but also you’re developing content for them to pass along to their social universe.

Our agency created a series of films that pushed the limits of performance, specifically with the intention of sparking discussion and creating dialogue around the BMW 1 Series M Coupé. The first film was entitled Walls and showcased the 1M’s unbelievable precision-driving capabilities as it sped through a series of silhouette cutouts in concrete walls. The second film, Helipad, featured the 1M drifting atop the world highest helipad. Both pushed the limits, were thrilling and fun to watch, and delivered on high performance.

We accessed out-of-home media, cinema, and rich online banners to drive traffic to YouTube. Our results were immediate; the conversation was ignited. Advocates took the discussion further, analyzing the films and posting their points of view on every film segment. Some even added their own soundtracks and created their own video games using the 1M manoeuvring through the walls.

Coverage from the marketing and automotive press was overwhelming, and it soon spilled over into mainstream media. After just two days, Walls was the most viewed, top-favorite, and commented on automotive video on YouTube, and within a month, the films had reached over 6 million combined views. To further fuel the discussion, we leaked behind-the-scenes footage.

The results were staggering: to date over 6.9 million online views, 575,800-plus YouTube comments, Facebook shares, tweets, blog posts, and news mentions. Best of all, following the launch of the campaign were three successive months of record-breaking sales in the history of BMW Canada (up 17% from the same month the year before).

The program’s success received international recognition and was judged the top-ranked program in the WARC 100, The World’s Smartest Campaigns. WARC compiled and analyzed the top global ad effectiveness and strategy competitions, and used those results to rank programs from around the world.

Achieving these results once can be considered an anomaly, but repeating and improving these results each year for consecutive new product launches indicates that there is more at work here than just a great campaign. As a way of demonstrating this, with each new release, in 2011 (1M Walls and Helipad), 2012 (M5 Bullet High Performance Art), and 2014 (M4 Ultimate Racetrack), the time needed to reach the 3-million-view benchmark has shortened. While the 1M videos took a combined 25 days, the M5 and M4 videos needed only nine and five days, respectively.

When marketers say Advocates are worth more than their weight in gold, they’re right! That means we’re obligated to constantly provide exceptional value in content that exceeds Advocates’ expectations to keep them truly engaged and supporting our brands.