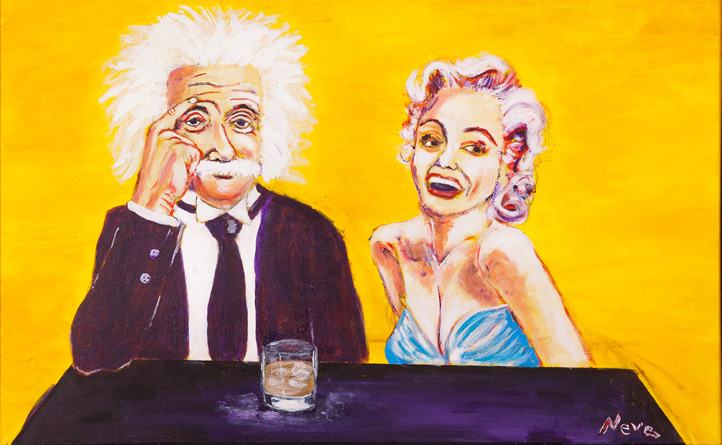 Unexpected Creativity for a Good Cause

If you’ve ever wanted to own an original Aldo Cundari, this is your chance.

The Cundari CEO is among 20 Canadian media and marketing professionals who have created original artwork that will be auctioned off at the “Art from the Unexpected,” a charity fundraiser developed by Ad Lounge and TC Media taking place April 16 at Toronto’s Steam Whistle Brewery.

All have created original artwork based on the theme “Origins.” Proceeds from the auction will go to SKETCH, a community-based initiative that engages homeless and underprivileged youth through the arts.

As a teen, Neve used to attend a Saturday morning art class at the ROM. While his professional career ultimately saw him go on to master the art of the deal as one of Canada’s leading media professionals, he never entirely abandoned art.

His prowess with a paintbrush is on display in a work provisionally titled “Marilyn, You Just Gave Me a Great Idea,” (he also listed “Energy Squared” as an alternate title).

The piece depicts Albert Einstein and Marilyn Monroe sitting together at a table, a glass of liquor in front of Einstein. “When I thought of how great ideas are born, I thought of the blend of art and science, people collaborating,” said Neve of his work.

The two figures depicted in his painting were playful and united by passion, they were dreamers and rule-breakers, said Neve. The glass represents either the idea or the catalyst for the idea, he said. “Who doesn’t think big after a few drinks?”

“I love art [and] encourage my daughter to try many forms of artistic expression,” said Neve. “Knowing how good it was for her, I wanted to support the endeavours of SKETCH to help those who may not have had the type of encouragement and opportunity I can give my own children.”

Ad Lounge founder Trina Boos created the first “Art from the Unexpected” event in 2009, raising $20,000 for SKETCH. It has not been held since then, with Boos explaining: “When you have an annual event, it can become a little stale and stagnant.”

“It provided people with an opportunity to see business leaders in a whole other light,” said Boos of the (apparently) quadrennial event. “We decided to do something where we asked the VPs and CEOs of organizations, who are not known for their visual creative ability, to challenge themselves.”

Business leaders clamoured to be part of the first event said Boos, since it gave them a chance to show a personal side of themselves seldom seen at the myriad industry events they attend.

Participants in the event are given six weeks to create an original piece of art exactly one minute to describe and promote their creation for a silent auction taking place later that night.

Erin O’Keefe, head of global brand management for KPMG International, said she “loved” art in high school but had only dabbled in painting during the past five-to-10 years. Her participation in “Art from the Unexpected” rekindled her enthusiasm for art as she experimented with various mediums.

“My job now is creativity in all sorts of different ways that doesn’t always involve the visual arts,” said O’Keefe, whose contribution to the auction is a watercolour that shows a wave at its apex.

O’Keefe said she was striving to convey what it feels like in your mind when an idea arises and how it evolves. “I really liked the notion of a feeling of an idea, and that’s where this wave came into play,” she said.

“I think great ideas come when you least expect them, so I thought about drawing a picture of me putting on socks on a Sunday afternoon, because that’s really when the great light-bulb moments happen, but I thought this was a little more evocative.”

O’Keefe said she was attracted to the project by the challenge of something she doesn’t make time for in her day-to-day life. “Friends would agree that the pitch part was the easy part – getting up at the event and talking about the idea is easier than the execution,” she said. “It sounded like a great challenge out of my comfort zone.”