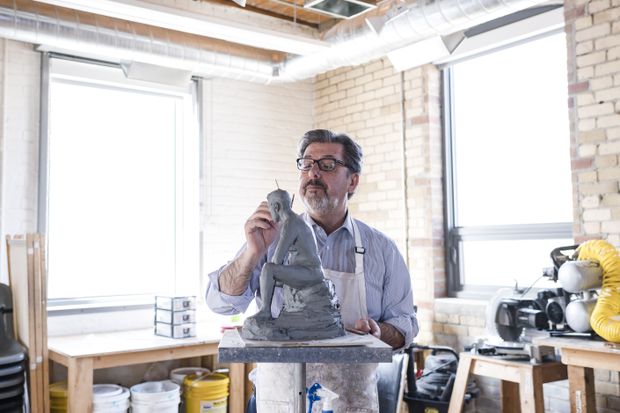 Most days, Aldo Cundari is busy helming his eponymous ad agency, crafting campaigns for marquee clients such as Maple Leaf Foods and the LCBO. But every Saturday morning, almost without fail, he unwinds at the Toronto School of Art (TSA), elbow-deep in clay.

He’s been attending the same sculpture class for the past decade. His agency staff originally enrolled him as a 50th birthday present. But he’s kept coming back for the tight-knit community – “the TSA doesn’t feel like a traditional school,” he says. “It’s less formal. Everyone’s very helpful” – as well as for the joy of returning to his first love. As a teenager he moved to Rome to become an artist, switching to marketing only after he lost 51 pounds, unable to reconcile his passion with his need to afford groceries.

But this past January, Mr. Cundari’s course got way more special when it was held at 24 Ryerson Ave., the TSA’s newly acquired, newly renovated $6-million building – the gift of an anonymous donor. With three floors of bright, brick-walled studios for painting, drawing, photography and digital arts, the facility doesn’t just make for more comfortable surroundings – previously, classes were held in a grungy, disused Toronto District School board building at Dufferin and Bloor Streets. It means that for the first time in its 50-year history, the TSA no longer has to worry about rent hikes, condo-fication or any of the other near-constant threats that plague similar independent arts organizations in the city.

“It’s pretty amazing,” says David Liss, the artistic director of the Museum of Contemporary Art Toronto, which also recently resettled after a three-year hiatus caused when its former space was slated for redevelopment. “Although philanthropy is very common to helping arts organizations, a donation this size is fairly unheard of in Toronto.”

For the TSA, the donation is particularly miraculous considering it went bankrupt in 2012. Enrolment had fallen from 1,200 to 500 students a year, and it was no longer able to pay the lease at its central Adelaide and Spadina location. Prior to that, in the 1990s, it almost closed after taking on too much debt.

What saved the school was the loyalty of three students, including Mr. Cundari as well as investors Brian Bradstreet and Sol Roter. The trio – nicknamed the “three wise men” by some of the staff at the school – first met at that the Saturday morning sculpture class, but didn’t realize they were each successful businessmen until after the bankruptcy, when they started discussing strategies to revive their home away from home.

To reopen the TSA, they donated money to buy back the school’s assets from the old landlord, rehired the teaching staff to begin offering new classes and revamped the marketing. “A full circle moment,” Mr. Cundari says. “My staff who signed me up at the TSA eventually won some awards for the work they did on the rebranding.”

The approach worked: last year saw the highest ever registration with about 1,500 pupils, helping the school run a slight budget surplus.

The trio also restructured the board so that it would be mainly made up of staff and students – insiders with the most vested interest in the institution’s survival.

“The staff – we are very happy. Brian and Aldo were students first,” says Tom Campbell, who has taught painting at the TSA since 1989. “We knew they wanted to maintain our spirit of independence.”

Despite the turnaround, there was one major issue that loomed: the facilities. Unlike the new Ryerson Avenue building, the postbankruptcy TDSB digs weren’t wheelchair accessible – violating the TSA’s barrier-free mandate. They also weren’t permanent. The TDSB sold the building to a condo developer, leaving the TSA until 2018 to find yet another address.

Which might have caused a protracted existential crisis. With rents in Toronto skyrocketing, the TSA’s only affordable alternative might have been to leave the city altogether, rebranding as the Hamilton or Cambridge School of Art. But everything changed when Mr. Cundari sent an e-mail to a friend who he says has “done extremely well in his career.” The subject line simply said “dream big,” and the message was a photo of the Ryerson Avenue building.

“We talked about naming the building for this person,” Mr. Cundari says. “But he didn’t want the recognition. He just wanted to help the school.” Another anonymous benefactor loaned money for extensive renovations, though the TSA is currently looking for $100,000 more to kit out a pottery studio.

Having ownership will save significant sums in rent. “It’s also fantastic for the students,” Mr. Campbell says. “Because it makes them feel like they are part of a longer, more permanent continuum.” It’s the kind of stability shared by other thriving independent arts schools in places such as Boston and New York, which also rely on the long-term security provided by the fixed address of a donated building.

Unbeknownst to Mr. Cundari and company, the structure was formerly owned by top artist Charles Pachter (his work often features iconic Canadiana – moose, Maple Leafs, the Queen). In the 1970s and early 80s, Pachter lived on the third floor, had a gallery called the Artery on the first and in-between housed an advocacy group called the Artists Alliance, whose members included activist June Callwood, novelist Margaret Laurence and filmmaker and painter Joyce Wieland.

Mr. Pachter eventually had to sell when interest rates shot up in the early 1980s. But more than 40 years on, despite the real estate prices changing and the area gentrifying, the purpose of the space is once again the same. “I know the building changed two or three times after I owned it,” Mr. Pachter says. “But there’s a lot of satisfaction for me to know that the TSA will continue the building’s history in the arts, in the middle of the city, for a long time to come.”

SOURCE: The Globe and Mail